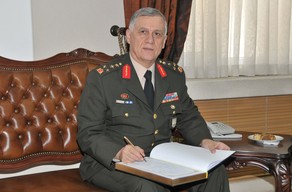 In the evening of July 15, 104 pro-coup servicemen killed in Turkey.

It was stated by Commander of the First Army of Turkey, Acting Chief of Turkish General Staff, Ümit Dündar.
According to him, as well 1563 servicemen were arrested.

He added that 90 people were killed, including 41 policemen, two soldiers and 47 civilians, also 1154 people were injured.

Notably, the number of people killed in Turkey amid recent coup events has reached 194 people.