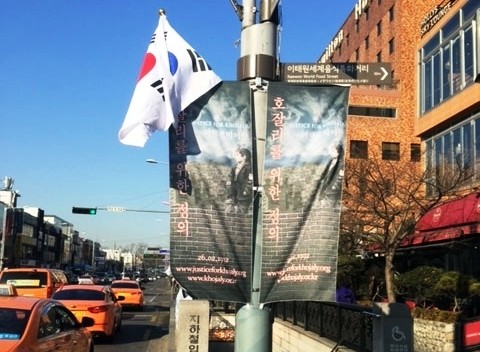 On the initiative of Azerbaijan’s embassy in the Republic of Korea, “Justice for Khojaly” banners were installed in Itaewon Street of the Yongsan district, Seoul in connection with the 24th anniversary of the Khojaly genocide committed by Armenia.

Banners installed on February 23 with a view of informing the Korean community about the Khojaly genocide will remain there for 15 days.

Yongsan which is home to 227,000 people and covers an area of 21.87 square kilometers is one of the central districts of Seoul and is often visited by foreign tourists. Most of the buildings of diplomatic missions and international organizations in Seoul are located in the district.


On Feb. 23-25, members of the BUTA Azerbaijan-Korea Student Association distributed various promotional materials prepared by the embassy in the Korean language among the city residents.


In order to thoroughly inform the Korean community about the Khojaly genocide, local and English-language media outlets in the country published articles and the press releases prepared by the embassy submitted to various Korean agencies, diplomatic missions and international organizations operating in Seoul.


An article by Azerbaijani Ambassador Ramzi Teymurov on the Khojaly genocide was published by English-language newspaper "Korea Herald".