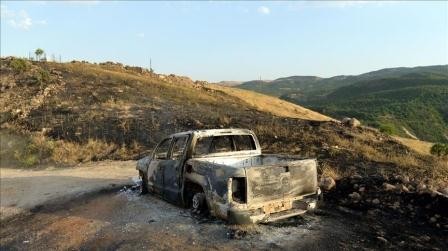 One police officer was martyred and two others seriously injured Saturday in a terrorist attack at a police checkpoint in the eastern city of Tunceli, according to local sources.

The injured officers were transported to Tunceli State Hospital and later taken to Firat University Hospital by a military helicopter.

Anti-terror operations against the PKK organization are ongoing in the region.

In June, at least nine people were injured in a PKK car bomb attack on a residential complex for members of Turkey’s judiciary in Tunceli province.

The PKK, listed as a terrorist organization by Turkey, the U.S. and the EU, resumed its 30-year armed campaign against the Turkish state in July 2015.


Since then, nearly 600 security personnel have been martyred and more than 7,700 PKK terrorists neutralized.