Turkey to shut down all Gulen-linked companies 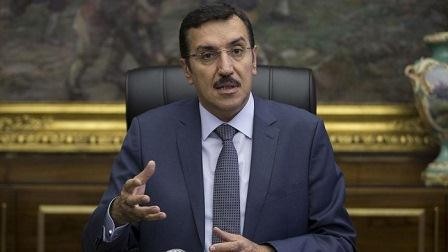 Turkey will probe and shut down all companies linked to the Fetullah Terrorist Organization (FETO), Customs and Trade Minister Bulent Tufenkci said Sunday.

Speaking to reporters in Malatya province after visiting the regional governor`s office, Tukenkci said FETO was behind the attempt "to overthrow the democratically-elected government and the constitutional order in the country.

"Companies which sponsor Fetullah Terrorist Organization and provide financial resources to them will be identified individually. Investigation will be opened about them, They will be closed or necessary procedures will be applied on them.”

Tufenkci’s comments come after the government shut down more than 2,000 Gulen-linked institutions across the country following the deadly July 15 coup attempt, an official gazette revealed Saturday.

According to the decrees published in the gazette, 35 health institutions and organizations as well as 1,043 private education institutions, organizations, dormitories, and hostels were closed for having links with the FETO.

The measures were taken under the three-month state of emergency in the country, which was announced by President Recep Tayyip Erdogan Wednesday.

“People are on the streets. Trade also continues. The nation still continues to do its shopping. We took this decision in order to make necessary decisions quickly, without any restrictions on the economy.”

Turkey`s government has repeatedly said the deadly plot on July 15, which martyred at least 246 people and injured more than 2,100 others, was organized by followers of U.S.-based preacher Fetullah Gulen.

Gulen is also accused of a long-running campaign to overthrow the state through the infiltration of Turkish institutions, particularly the military, police and judiciary, forming what is commonly known as the “parallel state”.