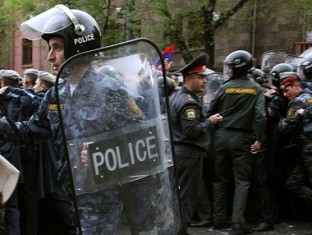 Two of 31 members of the armed group were wounded in Yerevan on the night of July 25, TASS news agency reported citing Armenian police.

Reportedly, the wounded gunmen were taken to the hospital.

An armed group that had seized a police station in Yerevan set on fire a Chevrolet police bus on July 25 in the evening.

Police said that on July 24 in the evening the gunmen had torched a Gazel police van.

Besides, the gunmen "took a tire outside, stuffed it with cartridges and also set on fire," which resulted in "a serious danger to residents of nearby houses."