Turkish society did not support the coup attempt of July 15 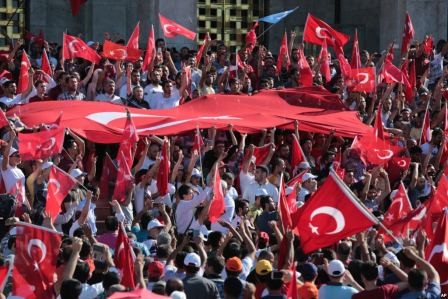 The Coup Attempt of July 15 was perpetrated by the members of the Fethullah Gülen Terrorist Organisation (FETÖ) that has been breeding within the Turkish Armed Forces (TAF) since 1980s. Members of FETO created a vacuum in the cadres of the TAF as a result of various judicial actions brought against the officers and conspiracies devised in these actions. Then they implanted their members into the army command positions left vacant through these illegal methods. During these years they pepared their evil plans that are against the satethood of Turkey.

The violence committed during this coup attempt was unimaginable..

The perpetrators of this attempt attacked the civilians who wanted to use their democratic rights with heavy weapons they seized, they intended to kill President Recep Tayyip Erdoğan and bombed the GNAT with F-16s before the eyes of the whole world.

The coup attempt of July 15 was also perpetrated against the elected, legitimate President and the Government of Turkey. It is unacceptable in any democracy of the world that a tiny group in the army slaughters their own people and tries to take control of the government. Thus, the efforts of certain international media organs to find excuses for an attempt threatening democracy in such a way in violation of media ethics reveal a sinister intention and disrespect against the Turkish people.

There was no satisfactory support to Turkish Democracy from the Western friends..

Another interesting point is the weak and retarded reactions given particularly by the Western countries against this bloody attack perpetrated against a democratic country which conducts negotiations for EU membership and a member of NATO since 1952 gave rise to question marks regarding the value and importance attached to human rights and the law by these countries.

Some conspiracy theorists claim allegations that the coup attempt is a scenario...


When we consider that the coup perpetrators have killed hundreds of innocent civilians and intended to assassinate President Erdoğan, the allegations that the coup attempt of July 15 was a scenario acted by President Erdoğan are unfair and groundless. These allegations are also outrageous defamations and insults to the will and sacrifices of a nation preventing this coup and the memory of more than 200 innocent people killed during the coup attempt.

Falling beyond logic, realities on the ground and reason, they are not different than alleging that the 27 May 1960 coup had been planned by the late Prime Minister Adnan Menderes.

The Turkish society did not support this coup attempt...

The coup attempt of July 15 was a great disaster threatening the Turkish democracy more than ever before. The persons who served the interest of this terrorist organisation controlling various cadres of the State administration and worked for this coup attempt to become successful cannot be allowed to remain in their positions. It is vital for Turkey to remove these persons from their positions as a part of the legal struggle carried out for a long time against FETÖ, so that Turkey will not encounter such a coup attempt ever again.
The coup attempt of July 15 has received immense reactions and condemnations from all segments of society ranging from political parties to different ethnic groups and ethnic beliefs, from non-governmental organizations to the business world, from sport clubs to artist communities and media. This honourable response cannot be monopolized by any single group. The coup attempt received no support from the society. This fact also demonstrates that this coup attempt was illegitimate.

The possibility of the issue of Fetullah Gulen's extradition by USA...

There is concrete evidence for the extradition of Fethullah Gülen. Moreover, the Treaty on extradition between the Republic of Turkey and the United States of America and the international principles permit extradition if effective and sufficient evidence is provided by the parties.

Turkey considers the USA as a friendly and allied country. The two countries have been NATO allies since 1952 and are strategic partners. Non-extradition of Fethullah Gülen may strengthen the perception in Turkish public opinion that the USA is harbouring him.