Another protest action begins in Yerevan 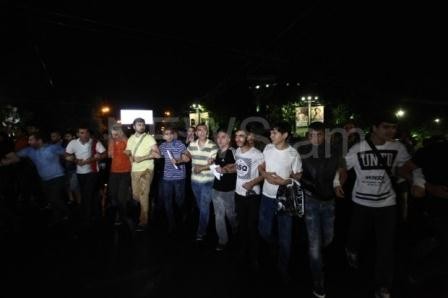 Another protest action participants marched towards the presidential residence in Yerevan.


The crowd marching to the avenue has now gathered in the forepart of the street, people getting wet in the heavy rain.

The police have banned the march participants to go further, noting that they are going to prevent the march, since there has been no notification about it beforehand and thus it is unlawful. Heritage Party representative Armen Martirosyan and several protestors are arguing, since the Heritage representatives announced that they will not move forward and will block the forepart of the avenue for half an hour. Several other young people insist on moving forward and break through the police cordon.


The police have already blocked the avenue. They have also brought internal troops to install barricades when necessary. Yerevan Chief of Police Ashot Karapetyan and his Deputy Valery Osipyan are on the site.

Finally, despite the complaints of the significant part of the protestors, it was decided to return to Liberty Square.