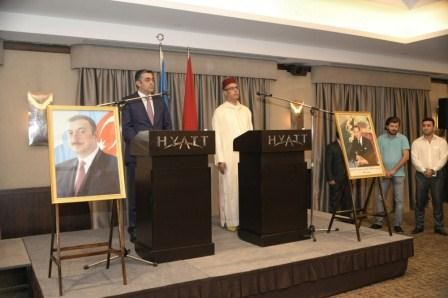 Expressing pleasure with the current level of the traditional friendly relations between Azerbaijan and Morocco, Mr. Hami said both countries have confidently developed their bilateral ties in the political, economic, cultural and other fields.

He went on to note that both countries support each other within the international organizations to make joint efforts for expansion of cooperation.

Minister of Communications and High Technologies Ramin Guluzade congratulated the people of Morocco on behalf of the Government of Azerbaijan stressing the history of relations between the two countries.

Morocco recognized independence of Azerbaijan on December 30, 1991. Diplomatic relations between two countries has been established on August 25, 1992. Azerbaijani embassy opened in Rabat in 2006, the Embassy of the Kingdom of Morocco opened in Baku in 2009.