Japanese Emperor Akihito to have a regent or resign 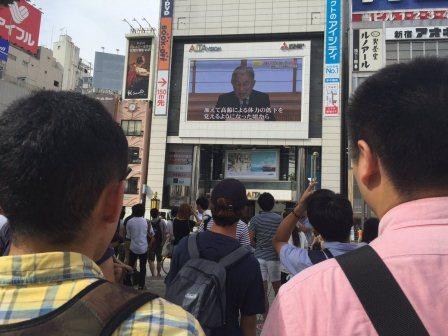 Japanese Emperor expressed his fear that it is going to be hard for him to continue his duties due to ageing and health conditions, in a rear address to the nation:

"It was some years ago, after my two surgeries that I began to feel a decline in my fitness level because of my advancing age, and I started to think about the pending future, how I should conduct myself should it become difficult for me to carry out my heavy duties in the way I have been doing, and what would be best for the country, for the people, and also for the Imperial Family members who will follow after me."

The last time the Emperor made an address after the Fukushima events.

"I am already 80 years old, and fortunately I am now in good health". The Emperor is to turn 83 this December.

"However, when I consider that my fitness level is gradually declining, I am worried that it may become difficult for me to carry out my duties as the symbol of the State with my whole being as I have done until now," said the Emperor.

The Emperor in Japan is not the official Head of State (this role is given to the Prime Minister), but he has a symbolic role, according to the post-WW2 Japanese Constitution. For instance, Japan is using both Gregorian calendar together with year designations stating the year of the reign of the current Emperor. So, this year is 28 Heisei in Japan (which means that it is 28 years since Emperor Akihito’s reign started).

As the Emperor said in the address, his son, the Crowned Prince Naruhito is most likely to serve as a regent, as Japan's imperial household law requires the emperor serve in the position until death. According to the constitution, in case he becomes incapacitated, the successor can act as regent.

It is being speculated that the law will most likely have to change to allow the elderly Emperor to step down. After the speech, Japan’s Prime Minister Shinzo Abe said, he will "think very seriously about what we can do" in order to ease the emperor's burden.

In the last 200 years none of the Japanese Emperors resigned while being alive. However, the case is far from being unprecedented, as historically about a half of Japan's emperors quit the throne while alive, according to NHK.