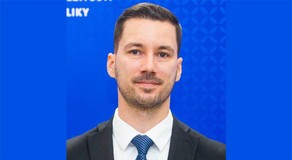 "Slovakia has been always a strong advocate of respecting international law principles, including the sovereignty and territorial integrity not only in the South Caucasus".

State Secretary of the Ministry of Foreign and European Affairs of the Slovak Republic Lukáš Parízek said in an exclusive interview with Report.

"Talking about the Naghorno Karabach conflict, the task of the day is to continue in discussions on a political solution of the conflict, which is the only way that, we believe, can bring peace", - State Secretary said commenting on the Nagorno-Karabakh settlement.

L. Parízek noted that, Slovakia welcomes that in Sankt Petersburg the leaders of Azerbaijan and Armenia have renewed their commitment to a cease-fire and to a peaceful settlement of the conflict made in 16th May in Vienna. "Sides must be committed to implementing Vienna arrangements" - State Secretary said.

According to him, Slovakia in this respect fully supports the work of the Minsk Group, "which plays an indispensable role in the process of finding a solution to the conflict for Nagorno-Karabakh". Slovakia highly appreciates and commends involvement of Germany in the process of the restoration of the peace talks between Baku and Yerevan.