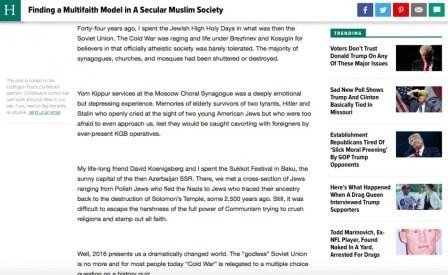 The Huffington Post has published an article by deputy director of the U.S.-based Simon Wiesenthal Center Rabbi Abraham Cooper headlined “Finding a Multifaith Model in A Secular Muslim Society”.

In his article, Abraham Cooper says Azerbaijan “stands out for its embrace of multiculturalism and protection of the rights of its citizens to be able to leave their homes on Friday, Saturday, or Sunday, go to the House of Worship of their choice and return in peace to their homes”. “How interesting that this country declared 2016 as the Year of Multiculturalism.”

“I recently flew on Azerbaijan Airlines from Tel Aviv to Baku. This is a nation that has steadfastly stood by Israel as well in a time of great upheaval. This distinct and consistent brand of domestic and foreign policy has yielded positive results, historically and today. Azerbaijan has historically been a safe haven for Jews and Christians, arguably, the most successful survivor of nearly a century of Soviet power, and for decades since their independence, one of Israel’s and the United States’ most loyal and risk-taking friends.”

“One of my heroes who has done so much to foster Interfaith harmony and tolerance, is a respected secular scholar, Dr. Kamal Abdullayev, Azerbaijan’s State Counselor on Multiculturalism, who told me that "the success of harmonic diversity has a cyclical payoff; a framework that was strong enough to reemerge with democracy, and in the realm of what is possible today, to aggressively build on a platform that simultaneously strengthens the health and prospects of our diverse communities while keeping radicalism far away, despite how geographically close it is.”

Abraham Cooper says: “So against the backdrop of hate and terrorism, and growing numbness towards violence, the concept of conscious engagement can be vital. Engagement that not only looks to support those that support our values, but an awareness that we must honor and promote ways to build positive models of interfaith dialogue so that young people will be inspired to see the goodness, not hate in others. We are all struggling with a new learning curve on the international stage, as Social media platforms change the rules of the marketplace of ideas in real time.”