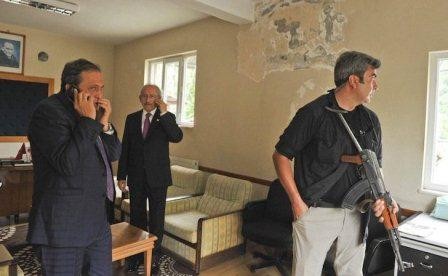 Fire has been opened on the motorcade of the Turkish main opposition Republican People’s Party (CHP) leader in the Şavşat district of the Black Sea province of Artvin.

The bodyguards of the CHP leader fired back at the attackers, a Doğan News Agency reporter said on CNN Türk.

Kılıçdaroğlu has been kept in his car for security while police and the assailants have engaged in an armed clash.

However, an adviser for Kılıçdaroğlu said it was not an armed attack targeting the CHP leader but clashes erupted in the region.

Kılıçdaroğlu was heading back to the city center, where he was for his party's program.

Kılıçdaroğlu told private broadcaster CNN Türk via telephone that they had been taken out of the clash zone by security forces.

“We are in a safe place but clashes are continuing. I hope no security personel will be hurt,” he said.