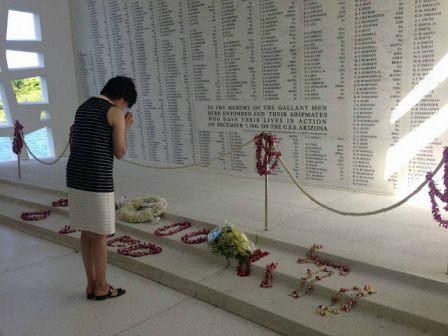 Japan's first lady Akie Abe made an unofficial visit to Pearl Harbor on Sunday where she paid tribute to Americans killed in Japan's surprise attack on the U.S. naval base in Hawaii on Dec. 7, 1941.

Japan's Chief Cabinet Secretary Yoshihide Suga said on Monday the first lady made her visit as a private individual, and it was not an indication that Japan's Prime Minister Shinzo Abe would visit Pearl Harbor, the Japan Times reported.

A visit by Abe would mark the first time an incumbent Japanese prime minister had gone to the Pearl Harbor memorial.

The attack on the naval base by Japanese torpedo planes, bombers and fighter planes drew the United States into World War Two when it declared war on Japan.

In May, Barack Obama became the first sitting U.S. president to visit Hiroshima, one of two cities the United States hit with atomic bombs in 1945. The other was Nagasaki.

Since Obama's visit there has been speculation over whether Abe would visit Pearl Harbor.

Akie Abe posted photographs on Facebook and wrote that she had gone to the Arizona Memorial offering flowers and prayer. No previous first lady has visited the site while her husband was in office.

More than 1,100 sailors and Marines were killed on the USS Arizona in the Japanese attack. The sunken battleship, at Pearl Harbor in Honolulu, is the resting place of almost all of them.