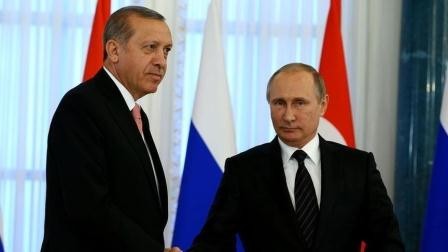 President Recep Tayyip Erdogan and Russian leader Vladimir Putin have agreed on efforts to speed up delivery of humanitarian aid to Syria, according to Turkish presidential sources.

Both men also agreed to hold bilateral talks at an upcoming G20 summit to be held on Sep. 4-5 in Hangzhou, China, the source – speaking anonymously – added.


The Turkish and Russian leaders held a phone call Friday in which they discussed bilateral relations and cooperation on regional issues and humanitarian crises.


During the conversation, Erdogan and Putin also emphasized the importance of normalizing relations between the two countries.

Erdogan shared information about the ongoing Euphrates Shield military operation against Daesh in northern Syria. Both leaders pointed to the importance of maintaining cooperation in the fight against Daesh and all terrorist groups for the security of the region, it said.