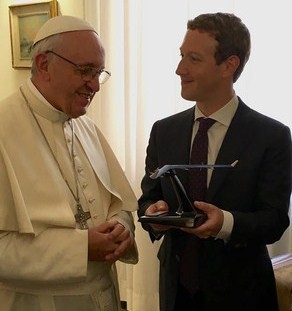 The founder of social networking site Facebook Mark Zuckerberg handed over a, a solar-powered aircraft that will expand Internet access in the most remote corners of the world when he met Pope Francis on Monday.

He wrote about it in his Facebook, posting photos from the meeting with the pontiff.

We also discussed the importance of connecting people, especially in parts of the world without internet access. We gave him a model of Aquila, our solar-powered aircraft that will beam internet connectivity to places that don't have it.

"It was a meeting we'll never forget," Zuckerberg said.

"You can feel [the Pope's] warmth and kindness, and how deeply he cares about helping people.