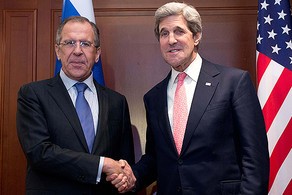 Russian Foreign Minister Sergei Lavrov and US Secretary of State John Kerry began talks in Geneva. According to the RIA Novosti, as the last round of Geneva (26 August) talks, the meeting is being held at President Wilson hotel.

The main theme of the meeting is situation in Syria, the sides will discuss joint coordination in the fight against terrorists.

The foreign ministers may also discuss the situation in Ukraine and issues on the bilateral agenda.