North Korea on verge of humanitarian disaster due to flooding 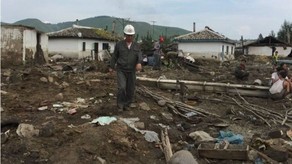 Aid agencies have warned that North Korea is facing a humanitarian disaster after tens of thousands of people were displaced by flooding.

"North Korea is on verge of a humanitarian disaster due to flooding", ICRC reported.

Rescue teams have been unable to reach some of the worst-hit areas.

North Korea already has chronic food shortages and is heavily dependent on foreign aid to feed its population.