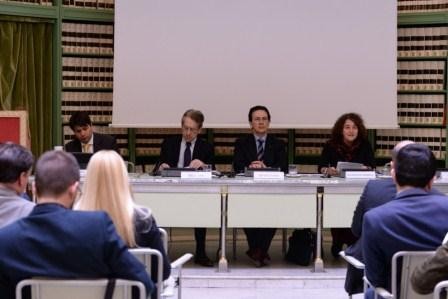 A conference entitled "Khojaly genocide in the context of international humanitarian law. Impunity and Justice" has been held at the Library of the Italian Senate.

The conference was co-organized by the Italian Helsinki Committee and Italian League of Human Rights, Sapienza University, Research Center for Cooperation with Eurasian, Mediterranean and African countries. The event participants included representatives of the Italian public, diplomatic corps, lawyers, historians and researchers.

The conference analyzed the crimes committed in Khojaly from the point of view of international law.

In his remarks, moderator of the conference, Secretary-General of the Italian Helsinki Committee Antonio Stango described Khojaly genocide as the bloodiest event in the history of the Armenia-Azerbaijan, Nagorno-Karabakh conflict, which still remains unresolved. He stressed the importance of the conference in terms of analyzing the tragedy in the context of international law.

Chairman of the Italian Senate Defence Committee Nicola Latorre paid tribute to victims of Khojaly genocide. He noted that Italy was one of the first countries mediating in the Nagorno-Karabakh conflict since 1990, saying the country could again play a critical role in finding a solution to the dispute. The Senator said Azerbaijan maintained cooperation with not only Euro Atlantic organizations, but also with Eastern countries.

Chairman of the Italy-Azerbaijan interparliamentary friendship group, member of the Italian delegation to the OSCE Parliamentary Assembly Senator Sergio Divina pointed to the international community's “indifference to some conflicts, especially the Nagorno-Karabakh dispute”.

Former Italian FM Giulio Maria Terzi di Sant'Agata also blamed the international community`s indifference for the fact that the perpetrators of Khojaly genocide had not yet been punished.

President of the Young Italian Researches Association on Azerbaijan and Caucasus (ASSAC), professor Daniel Pommier said Armenian President Serzh Sargsian was quoted in the book Black Garden by Thomas de Waal as saying: “Before Khojaly, the Azerbaijanis thought that...the Armenians were people who could not raise their hands against the civilian population. We were able to break that [stereotype].”