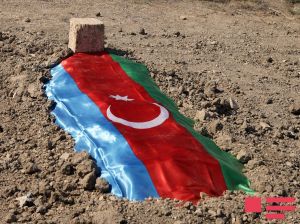 Azerbaijani serviceman Hasanali Abbasov, who was killed as Armenian armed forces fired at the positions of the Azerbaijani army in Nagorno Karabakh on March 11, has been laid to rest in the Yukhari Oysuzlu village of Azerbaijan’s Tovuz district.

Axar.az reports that the funeral was attended by the head and employees of Tovuz district executive authority, representatives of the State Service for Mobilization and Conscription, locals, a group of military officials and soldiers.

The Azerbaijani national flag covering the coffin was presented to the bereaved father.