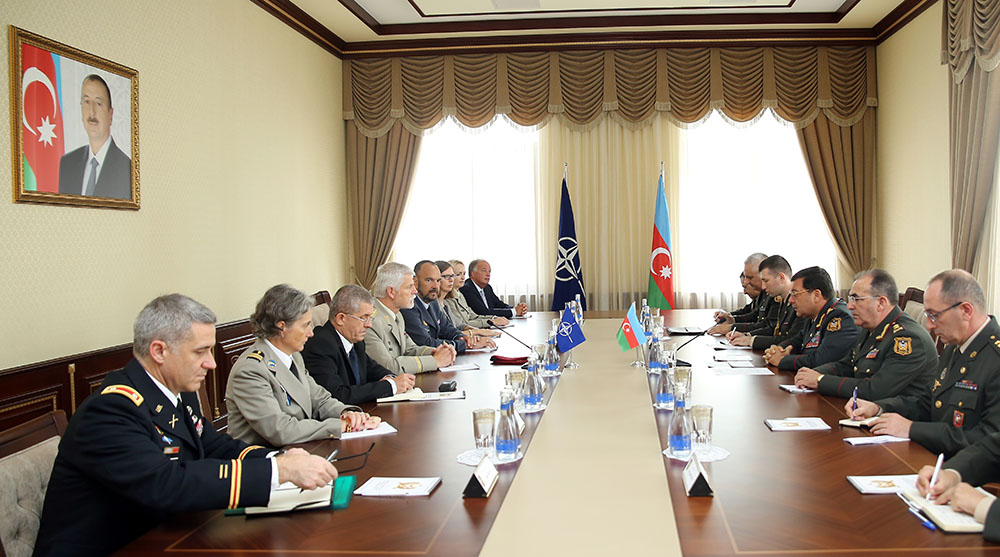 The First Deputy Minister of Defense of the Republic of Azerbaijan - Chief of the General Staff of the Armed Forces, Colonel General Najmeddin Sadikov has met with the delegation led by the Chairman of the NATO Military Committee, General Petr Pavel on September 7.

Having greeted the guests, Colonel General N. Sadikov, noting the successful development of military relations with the North Atlantic Alliance, spoke about military cooperation between Azerbaijan and NATO, including the activities of the Azerbaijan Armed Forces within the framework of various NATO programs, as well as the contribution of Azerbaijan to the NATO-led non-combat "Resolute Support" mission carried out in Afghanistan.

Colonel General N. Sadikov especially noted the merits of the national leader Heydar Aliyev and the head of state, Supreme Commander-in-Chief of the Armed Forces Ilham Aliyev in establishing fruitful and trusting relations between Azerbaijan and NATO.

Touching upon the military-political situation in the region, Colonel General N. Sadikov stressed the importance of resolving the Nagorno-Karabakh conflict within the territorial integrity of Azerbaijan and the norms of international law. Highly appreciating NATO's position on the supporting territorial integrity and sovereignty of Azerbaijan, the Chief of the General Staff expressed confidence that the Alliance will continue its efforts in this issue.

General P. Pavel in turn, especially noting that Azerbaijan is a reliable partner on Alliance, highly appreciated the participation of our country in the fight against terrorism, the significant contribution in providing airspace to cargo transportation for peacekeeping operations, including the high level of professionalism of Azerbaijani peacekeepers in Afghanistan.

Having expressed satisfaction with the visit to our country, the guest has also expressed his deep gratitude to the leadership of Azerbaijan for assistance in holding in Baku a bilateral meeting with the Chief of the General Staff of the Armed Forces of the Russian Federation.