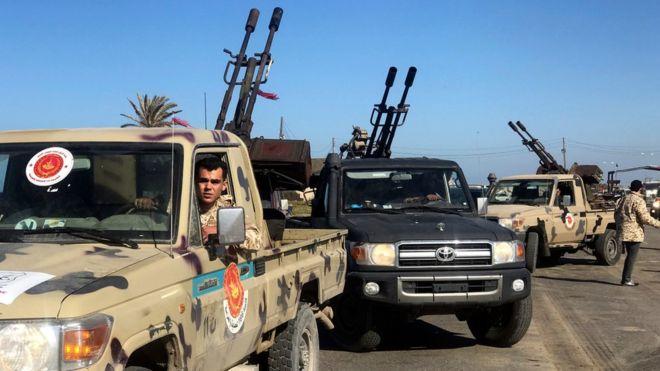 UN Secretary-General Antonio Guterres has called for an immediate halt to fighting in Libya, where forces loyal to a strongman have attempted the takeover of the capital.

Axar.az reports citing Press TV that, Guterres “urges the immediate halt of all military operations in order to de-escalate the situation and prevent an all-out conflict,” a UN statement said late Monday.

The statement said the UN chief “strongly condemns the military escalation and ongoing fighting in and around Tripoli, including the aerial attack today by a Libyan National Army (LNA) aircraft against Mitiga airport,” referring to the forces under Haftar’s command.

LNA spokesman Ahmad al-Mesmari said the Monday airstrike against Mitiga airport, east of the capital, had targeted a MiG-23 military plane and a helicopter. According to a security source at the airport, the attack hit a runway, causing no casualties.

The UN’s envoy to Libya, Ghassan Salame, condemned the air raid as “a serious violation of international humanitarian law, which prohibits attacks against civilian infrastructure.”

The airstrike reportedly led to the suspension of aerial traffic until further notice.

Other international powers have expressed their opposition to Haftar’s offensive, which could thwart diplomatic efforts to find a solution to the country’s conflict just days ahead of a national reconciliation conference aimed at uniting rival Libyan forces.

On Monday, the European Union (EU)’s foreign policy chief Federica Mogherini made “a very strong appeal to Libyan leaders and in particular to Haftar to stop all military activities... and to return to the negotiation table.”

French President Emmanuel Macron also expressed his “total opposition to the offensive against the capital and the endangering of civilian lives” during a telephone interview with Fayez al-Sarraj, the leader of the Tripoli-based Government of National Accord, according to the GNA.s

Also on Monday, the Kremlin called on “all sides to reject actions that could provoke bloodshed in battle and the deaths of civilians.”

At least 35 people have so far been killed in the fighting near Tripoli, the Libyan Health Ministry said on Monday. Haftar’s forces also said 14 of their fighters have died so far. The fighting has forced some 3,400 people from their homes.

“Clashes with heavy weapons are affecting residential areas, and an unknown number of civilians are unable to flee these locations,” UN spokesman Stephane Dujarric told reporters in New York on Monday.

Libya has been the scene of violence since 2011, when former dictator Muammar Gaddafi was toppled from power after an uprising and a NATO military intervention. His ouster created a huge power vacuum, leading to chaos and the emergence of numerous militant outfits, including the Takfiri Daesh terrorist group.

The oil-rich country has been divided between two rival governments — the House of Representatives, in the eastern city of Tobruk, and the government of Sarraj.

Haftar and the LNA have been backed by certain Arab governments, including the United Arab Emirates and Libya’s neighbor Egypt, and governments in Europe that once contributed to the NATO military operation to oust Gaddafi have also offered Haftar some diplomatic support.