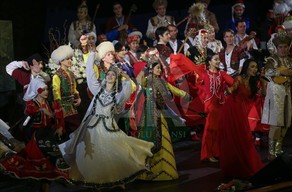 Concert dedicated to Novruz holiday held in the hall of the UN General Assembly on March 28.

This holiday is included in the Representative List of the Intangible Cultural Heritage of Humanity. The event, organized by the International Organization of Turkic Culture (TÜRKSOY), was attended by 150 artists.

Today's event was also timed to coincide with the 25th anniversary of Azerbaijan's independence, Kazakhstan, Kyrgyzstan and Turkmenistan.

Addressing the meeting, UN Deputy Secretary General Jan Eliasson expressed satisfaction with the visit of the concert, organized by TURKSOY.

"By steadfastness and unity we can withstand the harsh radical attacks. Radical forces are trying to sow discord and polarization.The best response to such actions is our unity, "- said Eliasson.

Note that, concerts organized by TÜRKSOY on the occasion of Novruz holiday will also be held on March 29 in New York and on April 1 - in Washington.