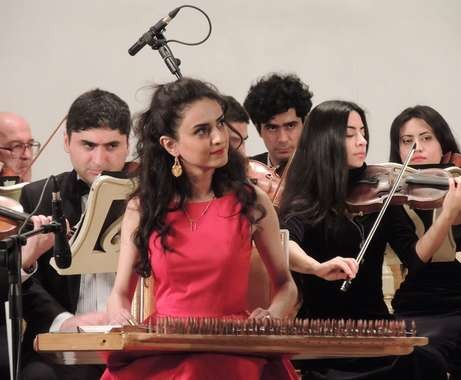 The event featured the performance of the Azerbaijan State Chamber Orchestra named after Gara Garayev under patronage of People's Artist Teymur Goychayev.

The first part of the concert ended with a performance of Azerbaijan's Honored Artist Rams Aliyeva, who performed the work by Nazim Aliverdibekov.

The second part of the concert program included the performance by an ensemble of kanun players "Inci", which played the works by well-known Azerbaijani composers such as Fikret Amirov, Suleyman Alaskarov and others.

The kanun, ganoun or kanoon is a string instrument played in much of the Middle East, Central Asia, and southeastern Europe. It is played on the lap by plucking the strings with two tortoise-shell picks, one in each hand, or by the fingernails, and has a range of three and a half octaves, from A2 to E6.