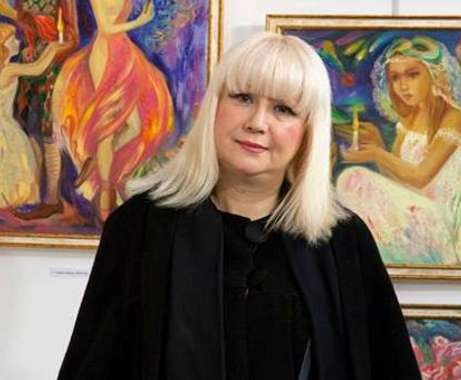 Famous Azerbaijani artist Nigar Narimanbayova, who lives and works in Paris, is among those closely watching the situation on the contact line between Armenia and Azerbaijan.

Narimanbayova, whose ancestor are from the occupied Karabakh, namely Shusha, heartily waits for the liberation of these territories.

"I am proud of my country, my President, my heroic people and brave sons, who gave a worthy response to this atrocity and aggression. Our nation has always been the most courageous, the most spiritually rich, the patriotic and selfless lovers of their native lands. Of course, our enemy is completely defeated. Important strategic positions had been already taken. I'm confident that we soon will see the holy day when our army will liberate our native land Shusha", she told to local media.

The Azerbaijani artist further expressed deep condolences to the families of heroically fallen soldiers and mothers of Azerbaijani sons who sacrificed their lives for the country.

“They are real heroes. They gave their lives for freedom of our native lands, so that our children could return to their ancestral homelands. I know that their blood will be avenged, because God is always with those who bear the truth and justice. Our motherland is beautiful, rich and prosperous. Baku is the pearl of the Orient, the most unique city that combines East and West. Our people are beautiful in body and soul, rich in spirit and faith. Such kind of people can't be defeated," she added.

Holding numerous exhibitions and being already a very famous artist in France, Narimanbayova always emphasizes that she is an Azerbaijani. Azerbaijani Diaspora is often a permanent guest at her international exhibitions. Azerbaijani flag decorates the salons, where the national artist presents her creative work.
“Their deep feeling of patriotism has spread on us and our descendants. I have been living and working in Paris for a long time, but I have never interrupted the ties with Azerbaijan,” she said.

Grandmother of the artist is a Frenchwoman Irma la Douce, who also loved Azerbaijan and called it her second birthplace after France.

The artist says that in the 1930s, her grandmother visited Baku with her grandfather Azerbaijani Yaqub Farman Narimanbayov, who was the son of the Governor-General of Baku, where they lived till the end of their lives.

“I have two great powers such as Azerbaijan and France in my blood, and I consider that it’s my mission to integrate these two great cultures.," the artist emphasized.

"My father created many paintings devoted to the courage of our soldiers, such as "On the nameless height", "Under the banner of the Motherland", which are an ode to the memory of Azerbaijanis killed in Karabakh. He always believed that the victory will be ours, and the enemy will be defeated and we'll come to his native town to admire the expanses of our country from the bird's flight of the Karabakh mountains," she said.

Shusha, one of the unique cultural centers of Azerbaijan, is a city, characterized for its natural beauty, and is a valuable monument of national architecture and medieval urban art. Constantly keeping the Azerbaijani national-spiritual values and traditions of music, Shusha before forming as a city of great economic, political and cultural significance, has passed a rich way as a center of Karabakh khanate, played its role in the lives of the people of Azerbaijan. This city, which went down in history thanks to Gasim bey Zakir, Khurshidbanu Natavan, Mir Mohsun Navvab, Najaf bek Vezirov, Abdurrahim bey Hagverdiyev, Yusif Vazir Chemenzeminli, Firidun bey Kocharli, Ahmed bey Agaoglu and other eminent personalities, is known worldwide as the cradle of the Azerbaijani mugham.

In the battle for the defense of Shusha, 195 Azerbaijanis were killed, 165 people were injured, 58 people captured and taken hostage. During the occupation the Armenian vandals looted the museums, in which there were thousands of pieces, destroyed hundreds of historical and cultural monuments, defaced shrines and mosques, destroyed a large number of specimens of rare manuscripts, ruined the education and health care institutions.