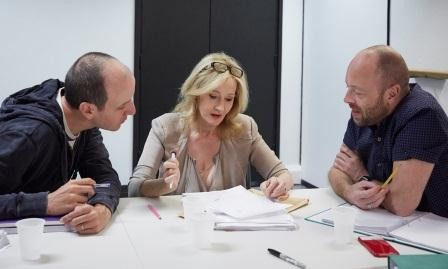 Harry Potter is back for another round of magic, struggles with the darkness and parents.

This time, Harry's the dad, struggling with his own son.

The eighth installment of the Harry Potter series, the two-part play, "Harry Potter and the Cursed Child," will be published as a book this summer, author J.K Rowling announced on her “Pottermore” website.

The "special rehearsal edition" script book will be available at midnight on July 31, a day after the Harry Potter play opens in London.

The newest Potter installment, the first official Harry Potter story to be presented on stage, is based on an original new story by Rowling, Jack Thorne and John Tiffany, and is written by Thorne.

We last saw Harry saying goodbye to his children at Platform Nine and Three-Quarters, 19 years after the Battle of Hogwarts, in the epilogue of "Harry Potter and the Deathly Hallows."

"Harry Potter and the Cursed Child" picks up after that scene, with father of three Harry Potter employed at the Ministry of Magic. Both Harry and his son Albus struggle with their family legacy and against the darkness.
The eBook will be published simultaneously with the print editions by “Pottermore”, Rowling's digital entertainment and e-commerce company, in collaboration with Little, Brown Book Group in the United Kingdom; and Scholastic in the United States and Canada.

By the way, Rowling's best-selling, seven-volume Harry Potter series was published between 1997 and 2007 and has sold over 450 million copies worldwide.