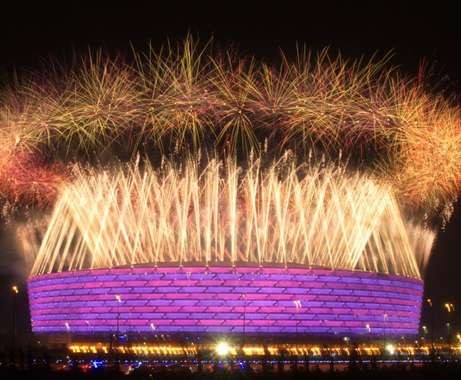 Baku Olympic Stadium, which was designed to host first ever European Games, has gained another international award as one of the best sports facilities.

This spring the 68,000-seat stadium was recognized as the best project by the American Council of Engineering Companies.

The awarding ceremony took place in New York on March 19. The project of the Baku Olympic Stadium was represented by "Tornton Tomasetti", which provided structural design services for the stadium.

Baku Olympic Stadium is always on the spotlight of the international arena as one of the most spectacular sports facilities in the world.

Last year the stadium was selected as the best project in sports and entertainment by Engineering News Record magazine. The building was also nominated for “Stadium of the Year” award this year.

A diamond of the Azerbaijani sport facilities, the national Olympics Stadium was founded in 2011.

The six-storey stadium occupies an area of nearly 50 hectares. The pitch has four entrance gates, while the stands have 26 gates. The arena has room for 68,000 spectators and 3,100-car parking spaces.

The facility consists of the main and auxiliary stadiums, an auxiliary building, as well as sections for VIP, CIP, media and disabled spectators.

The construction process at the facility went ahead in accordance with the International Building Code, as well as those of UEFA and FIFA.

The stadium hosted the majority of the events of the first European Games held in Baku last June.

It has been named the world`s best sports facility of the year by Engineering News Record magazine.