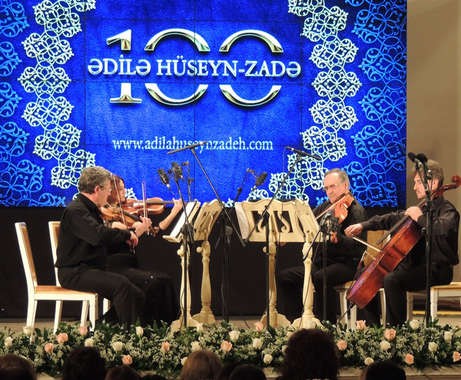 Addressing the opening ceremony, Azerbaijani composer, chairperson of the Azerbaijan Composers' Union, UNESCO Artist for Peace Firangiz Alizade spoke about the life and creativity of the prominent composer.

"Adilya Huseynzade was the first female composer in the East," Alizade said. "She was a great performer, composer and musician. I am proud to have a luck to be her student. I will never forget my first meeting with her. I was seven years old when I wrote my first musical piece. My parents saw that I had some talent and decided to send me to music class.They have learned that the best teacher of this specialty is Adilya Huseynzade. So, they send me to her class. I was amazed by her talent. If I hadn't met Adilya khanum, I wouldn't become a composer."

"I'm so glad to hear the compositions of Adilya khanum. We had a lot of wonderful days together. In 1946, I entered the Bulbul music school. I started composing songs since fourth year of my school. Adilya khanum was my first teacher and helped me develop that talent. For me she's not dead. She always lives in my heart." Ibrahimova.

The event was hosted by the doctor of philosophy on art criticism associate-professor Lala Huseynova.

Adilya Huseynzade, who was born in Baku on April 28, 1916, was one of the last and the most beloved students of the great Azerbaijani composer Uzeyir Hajibeyov as well as the first Azerbaijani woman who has received a musical education.

Adilya Huseynzade studied at the vocal department of the Conservatory in the class of Bulbul (Murtuza Mammadov), famous Azerbaijani tenor. Later, Bulbul became the first to perform his student's songs.

After presenting the musical composition "Memories" written by Hajibeyov, the young musician was enrolled in the class of the great master.

In 1953, being already popular, Huseynzade completed her studies at the Tchaikovsky Moscow State Conservatory, getting classes from Professor Boris Zeidman.

Over the years the composer has created a number of musical works in various genres, including symphonic poems, works for choir, sonatas for string quartet, cello and piano and romances.

Works by Azerbaijani composer, the cantatas for choir and orchestra "Beautiful homeland" written on the words of national poet Samad Vurgun as well as " The Voice of World|" have received positive reviews of the former Union of Soviet Composers.

Symphonic poem dedicated to Basti Bagirova, has received the highest rating at the decade of March Events - Azerbaijani's Genocide committed by Armenian nationalists in 1918. The string quartet consisting of 4 parts was highly appreciated at a plenum of the Azerbaijan Composers Union.

The first female composer in the East also contributed to the development of vocal art. In her work "Dreams" written on the words of poets Rasul Rza and Nigar Rafibeyli, the musician could use national music in a rare song cycle, showing her dramatic instinct and the ability to create artistic images.

In the film "Arshin Mal Alan, national comic and romantic operetta, Huseynzade voiced the role of Asya. For a long time she taught gifted children at the Bulbul musical school.

Adilya Huseynzade, the true representative of the Azerbaijani nobility, passed away at the age of 90.