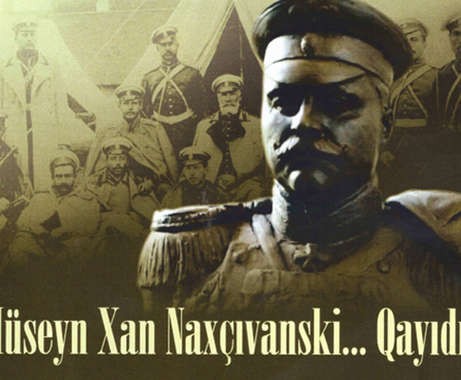 The full-length film is a joint production of "Salnamə" and "Lennauchfilm" film production companies with assistance of the Ministry of Culture and Tourism.

The documentary titled " Huseyn Khan Nakhchivanski. The Returning" was shot in Baku, Nakhchivan and St. Petersburg.

The screenwriter and director of the film is Valentin Gurkalenko.

In 1874, Huseyn Nakhchivanski was admitted to the Page Corps and graduated with honors in 1883. He received the rank of cornet and was assigned to the elite Leib Guard cavalry regiment. Nakhchivanski served there for twenty years and ascended positions from cornet to Colonel of the Leib Guard.

Khan Nakhchivanski was the commander of the 44th Nizhegorodski Dragoon regiment from November 1905, and in 1906, he was made Fliegel-Adjutant of H. I. M. Retinue and appointed the commander of Leib Guard cavalry regiment, where he started his military career. In 1907, he attained the rank of major-general.

In 1912, he was appointed as the commander of the 1st detached cavalry brigade, in 1914 he was conferred the rank of lieutenant-general and became the commander of 2nd cavalry division and with this position entered World War I.

He was supposedly executed by the Bolsheviks in January 1919.