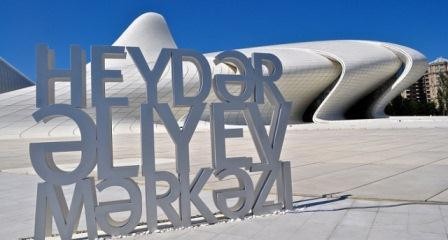 Royal Institute of British Architects-RIBA nominated the names of 30 buildings for the first International Architecture Award 2016. Azerbaijan`s Heydar Aliyev Center, constructed by the famous architect Zaha Hadid is among them.

During June-September, a jury headed by the Pritzker Architecture Prize Laureate, Richard Rogers will visit the each building.

Along with Heydar Aliyev Center, Zaha Hadid`s one more building - the Jockey Club Innovation Tower (JCIT) in the Hong Kong Polytechnic University has been nominated for the award.

The first stage covers the selection of 20 buildings out of 30 and the final stage winner building out of 20.

The winner of the award will be announced in December 2016.

The Royal Institute of British Architects (RIBA) is a professional body for architects primarily in the United Kingdom, but also internationally, founded for the advancement of architecture under its charter granted in 1837 and Supplemental Charter granted in 1971.RIBA runs many awards including the Stirling Prize for the best new building of the year, the Royal Gold Medal (first awarded in 1848), which honours a distinguished body of work, and the Stephen Lawrence Prize for projects with a construction budget of less than £500,000. The RIBA also awards the President`s Medals for student work, which are regarded as the most prestigious awards in architectural education, and the RIBA President`s Awards for Research.