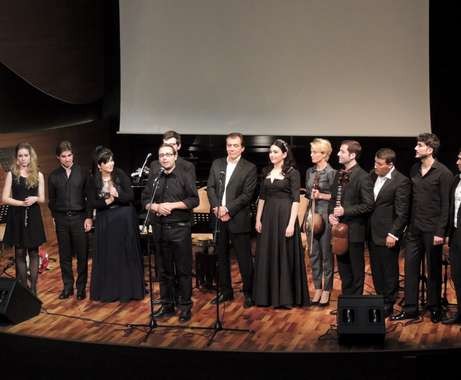 The International Mugham Center in Baku continues to host a series of concerts in the framework of "Sound Waves" folk festival. The second concert of festival took place on May 13.

The grand concert, co-organized by the International Mugham Center, Italy-Azerbaijan Association as well as Center of Italy in Baku with contribution of Azerbaijan's Culture and Tourism Ministry brought together Azerbaijani and Italian musicians on the same stage.

Addressing the opening ceremony, Italian Ambassador to the country Giampaolo Cutillo thanked organizers of the festival.

“This is our second event which allows the audience to hear the synthesis of Azerbaijani and Italian folk music. The project aims to acquaint Azerbaijani public with our folk music. This time we invited our well-known and young musicians, who we are sure, will brighten up your evening together with well-known Azerbaijani performers," he added.

The audience was thrilled to hear beautiful melodic voices singing the compositions by talented composers Kamala Alizadeh and Stefano Moscaritolo as well as improvised Italian and Azerbaijan folk songs. The stunning performance of musicians caused a lot of positive emoticons and gave them a well-deserved storm of applause. They managed to create a magnificent synthesis of Azerbaijani and Italian folk music.

"We are pleased that we were invited to take part in this project. As all musicians we love experiments. It's a novelty for us, because we have not been closely familiar with Azerbaijani music previously. However, after hearing the performance of your singers during rehearsals, we just fell in love with it. We hope that our cooperation with your musicians will continue," said the musician.

“Sound Waves” folk festival will run until May 26 with the concert of Azerbaijani -Spanish musicians.