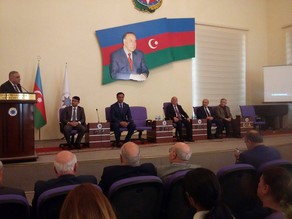 'Fitna' (Intrigue) documentary has been presented at the Academy of Public Administration under the President of Azerbaijan.

M.Gurbanli said that there is an urgent need for making a professional documentary to involve people into the fight against religious radicalism by delivering its consequences to all sections of society and informing them.

Then the film has been shown.

Notably, the film fully discloses how dangerous is this problem for society and the public as an example of the people, becoming victims of religious radicalism as well as those, brought to criminal responsibility.