Death toll in Iran from coronavirus rises to 19
﻿

​An exhibition of Mexican artist opened in Ganja 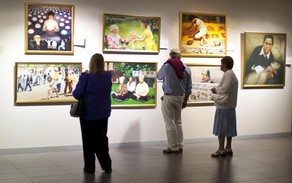 In framework of cultural events held by this Diplomatic Representation, a series of exhibitions will take place in this and in other cities and regions of the country Mingachevir, Gabala, Shamakhi. Today's event, which took take place in the Mehseti Ganjavi Center, is the first carried out by the embassy outside the capital.

Margarita Morales, born in the Mexican state of Tamaulipas, attended college in Mexico City and later lived some years in London. He currently lives alternately in Berlin and Mexico. He has exhibited his paintings in numerous international institutions and museums. Baku already knows the art of the painter thanks to the exhibition, held at the National Art Museum of Azerbaijan, in June 2015.

\
Mexico and Azerbaijan are countries with ancient cultures, and deriving from this factor, both countries have vast potential for cooperation in this area. Culture is a stable basis for better understanding and rapprochement of the two peoples.