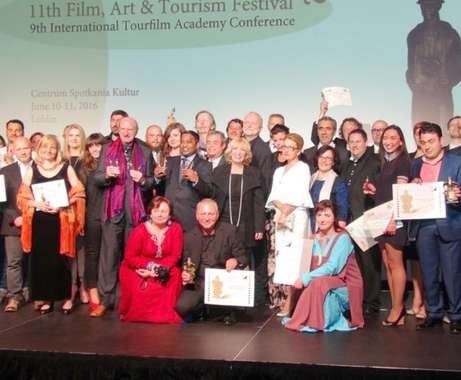 The International Film Art & Tourism Festival kicked off in Poland.

The event featured the exhibition "Polish architects in Baku", organized upon the initiative of festival organizers as well as the support of the Azerbaijani embassy in the Cultural Center of Lublin. The exhibition will run till the end of June.

Also, Baku Media Centre was awarded the Best Promotional Film award in Cultural Tourism Category for the film "Experience the spirit of Azerbaijan". The film " Azerbaijani Cuisine: The Aftertaste" by Yaddash Studio was awarded Tourist Owl.

FilmAT has been active since 2006 and is the only Polish Festival associated to an International Committee of Tourism Film Festivals CIFFT. FilmAT organizes competitions in four parallel areas, in each the highest award is a Grand Prix.

The festival holds conferences of the International Tourfilm Academy, dedicated to Tourism and Ecology Films.

FilmAT together with ” Tourfilm Academy Foundation” has published its quarterly magazine edition. There you will find great articles about Tourism and about our CIFFT Festival Members. The magazine is available in two languages: German and English.