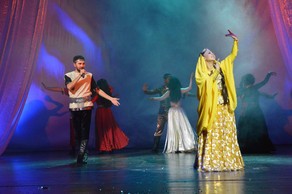 Theater of Young Spectators played host to the meeting on the results of the 88th theater season.

Director of the theater, Honored Artist Mubariz Hamidov delivered a speech in the meeting.

Then was held a presentation of "Sima" ("Face") theater awards. The winners were elected by asecret ballot.

According to the jury’s decision, "The best performance of the season" named a play of Vera Shugrayeva and Ali Amirli "Relatives". "Best Characteric Artist of the season" became Atabala Safarov.

Then other winners were awarded.

The meeting has concluded with a concert.