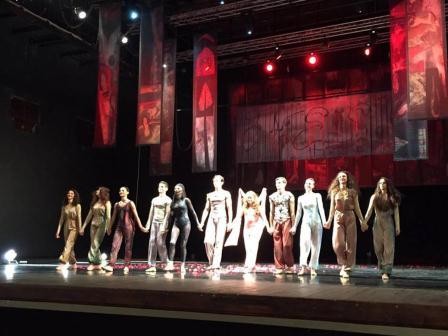 A long-awaited world premiere of ballet "Khamsa" took place in the Summer Theatre of Batumi on August 14.

The ballet is based on the same named collection of five poems by the world-famous Azerbaijani poet and thinker, Nizami Ganjavi.

Famous composer and singer, Azerbaijan’s Ambassador to Russia, People’s Artist of Azerbaijan Polad Bulbuloghlu is the author of the music of the "Khamsa" ballet.

The ballet was performed by the Tbilisi Modern Ballet named after Georgi Aleksidze, under artistic supervision of Maryam Aleksidze’s chamber troupe.

The initiative for the premier belongs to the President of Georgian Association Dialogue of Cultures – 21st century, Valeri Asatiani and Choreography Foundation named after G. Aleksidze.

The ballet based on the brilliant music of Polad Bulbuloglu was warmly received by the Georgian audience that enjoyed a fascinating rhythms, stunning scene and unique costumes.

Artistic director of the play was honored artist of Georgia, Teymuraz Murvanidze.

After the performance, Polad Bulbuloglu warmly thanked all participants for the great performances and efforts made to stage the ballet "Khamsa" and expressed deep gratitude to Valeri Asatiani for organization of such a memorable evening.

Soon "Khamsa" will be also shown in Azerbaijan.

Nizami Ganjavi, the poet, who began by writing lyrics in short forms – gasida, gazal, rubai, gained popularity not only in the Near and Middle East, but also on distant shores.

The description of a man's inner world, his feelings, and thoughts along with the dynamic development of the main hero's characters underlies the basic aim and content of the Nizami literary school.

The works of Nizami Ganjavi have been translated into many languages. The rare manuscript copies of his works are kept and preserved like precious pearls in famous libraries, museums.

Nizami Ganjavi passed away in 1209 in his native city of Ganja. A grandiose tomb has now been raised over his grave.

Bulbuloglu became famous in the whole Soviet Union with composing jazz-influenced pop songs with deep folk feelings in Azerbaijani and Russian. His father was Bulbul, a famous Azerbaijani opera singer who exposed Polad to musical culture from an early age.

He also sang his own songs. Three of his songs became Song of the Year and he received numerous prestigious awards in the Soviet Union. Bulbuloglu is a lyrical tenor.

In the 1990s, despite having a huge success with a new version of his old song Gəl Ey Səhər (Come, Hey Morning!) in Turkey and sold out concerts in Russia, Bulbuloglu started a political career. He became the Azerbaijani Culture Minister and is currently the Azerbaijani ambassador to Russia.