"The state is able to assist the banks" 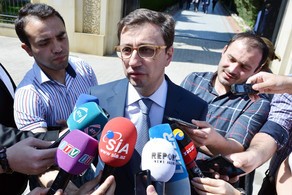 If any commercial bank of Azerbaijan faced with liquidity problems, the state has enough financial resources to solve it.

Chairman of the Board of Directors of the Chamber of Financial Market Control Rufat Aslanli told reporters: "We have a special program for banks with short-term liquidity problem."

According to R.Aslanli, the state is able to assist these banks: "Due to the certain problems in the Bank Standard, we have decided to help the bank. This is possible for other banks, although we do not expect a repetition of a similar situation in other banks. However, if any circumstances, we have enough resources to deal with the liquidity problem."

The chairman noted that the purpose of recovery in Bank Standard, a temporary administrator has been appointed. According to him, the moratorium on all payments, except for the social benefits, has been declared: "Bank Standard is not closed. Just moratorium is temporarily declared. The state took over management of the bank for a certain period of time."