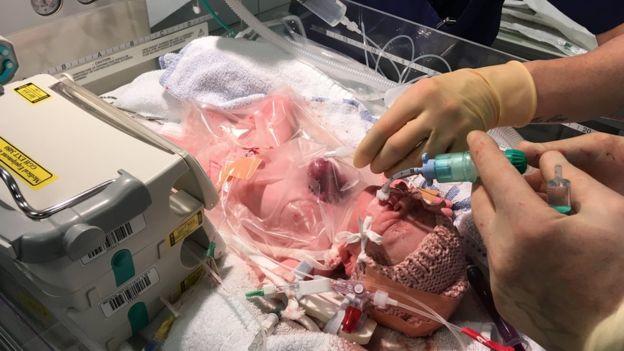 In a UK first, doctors have used keyhole surgery to repair the spine of a baby with spina bifida while it was still inside the womb.

Surgeons at King's College Hospital say the procedure is not a cure, but could be the difference between some children learning to walk or not.

Sherrie Sharp and her son Jaxson had the operation 27 weeks into the pregnancy.

Spina bifida was diagnosed after the routine 20-week pregnancy scans.

They showed Jaxson's spine and spinal cord were not forming correctly.

Gaps in the developing spine meant the cord was bulging out of his back and was left exposed to the amniotic fluid in the womb.

This damages the crucial nerves in the spinal cord and could lead to paralysis, a loss of sensation in the legs and problems controlling the bladder and bowels.

The longer the spinal cord is left exposed, the greater the damage.

Sherrie, 29, and from West Sussex, said the news was a shock, but an abortion was a "definite no".

She decided to have pioneering surgery to correct the defect, although there was the risk of the baby arriving prematurely.

Sherrie told the BBC: "I wanted to do the best for my baby, I wanted him to have a better life and there's nothing wrong with that."