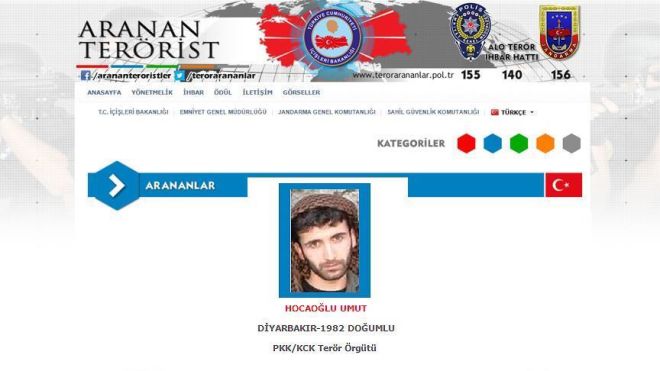 A senior PKK member was among 14 terrorists killed during air raids carried out by security forces for three days beginning on Nov. 7 in eastern Turkey’s Tunceli province, a Turkish military source said.

The slain high-profile terrorist, Umut Hocaoglu, who also went by the nickname Agit Amed, was said to be in charge of the PKK’s Tunceli headquarters, the source, who spoke anonymously due to restrictions on talking to media, said.

Hocaoglu had a price tag of 1.5 million Turkish liras on his head and was also featured in the blue pages of Turkish Interior Ministry’s “wanted terrorists” list.

The Turkish Interior Ministry list has been divided in five color-coded categories, with red designated as the most wanted, followed by blue, green, orange and grey.

The air raids had taken place in the province’s Bali Valley region.

The Tunceli public prosecutor continues its search for the identities of other terrorists killed in the operation.

The source said Hocaoglu had not only planned several terrorist attacks in Turkey, but also participated in them.

The PKK -- listed as a terrorist organization by Turkey, the U.S. and EU -- resumed its decades-old armed campaign in July 2015.