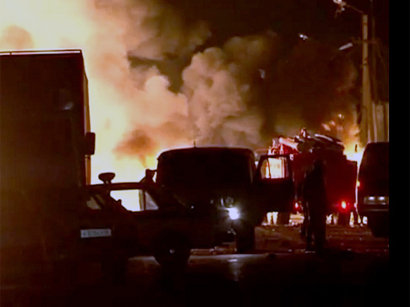 An explosion Tuesday at a sprawling ammunition plant near Kansas City, Missouri, killed one person and injured three others, the U.S. Army said.

Axar.az reports that the Army Joint Munitions Command said in a statement that the blast happened at the Lake City Army Ammunition Plant in Independence, just east of Kansas City. A spokeswoman said no other details, including what caused the explosion, were immediately available.

The 77-year-old plant sits on nearly 4,000 acres and is the first of a dozen Army-run small-arms factories. The plant makes small-caliber ammunition and tests its reliability. It also operates the NATO test center.

The property has more than 400 buildings and nine warehouses, and has a storage capacity of more than 700,000 square feet. Its workforce includes 29 Department of Army civilians and a soldier to provide contract oversight. It has a governmental staff payroll of $2.9 million.

Mark Carrick, deputy fire chief in Independence, said the plant has its own fire brigade that is working on the explosion.