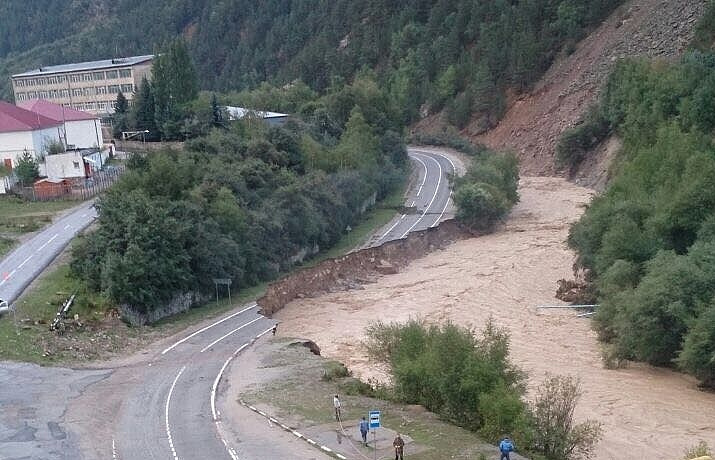 Rescuers have established contact with all tourist groups staying in the mountains of the Elbrus District of Russia’s southwestern republic of Kabardino-Balkaria following a powerful mudslide, the Emergencies Ministry told TASS.

Axar.az reports citing TASS that, some 224 people were staying at ten tourist facilities and 49 tourist groups consisting of more than 300 people, including 133 foreigners, traveled along the routes of Mount Elbrus, the highest mountain in Russia and Europe.

"Contact has been established with tourist groups and they are being accompanied and taken to safe areas," a ministry spokesman said.

Rescuers evacuate tourists from the Terskol village to Tyrnyauz by Mi-8 helicopters. Some 114 tourists, including 67 foreigners, have been evacuated by seven flights.

A powerful mudflow descended early on Friday in the Elbrus region from the Adyl-Suu gorge. A gas pipeline in the area was affected by the mudflow, and several settlements were left without power. A state of emergency was declared.

Five settlements, home to more than 5,200 people, were cut off access to roads. Six settlements were left without power and gas supply. Power supply was restored to all those villages.

Some 365 people and 50 pieces of equipment are dealing with the aftermath of mudslides.

Rescuers suspended until the morning the search for three people who went missing. Three cars fell into a river because of the mudflow, there were five people inside and two people have been rescued. Among those missing is head of the Elbrus settlement Mussa Jappuev who was the first to arrive at the scene.