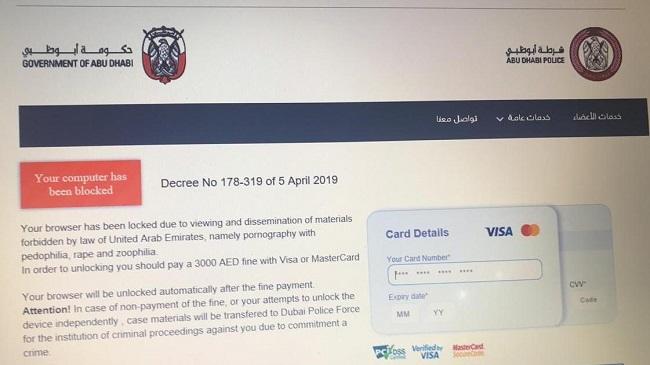 Axar.az reports citing The National that police in Abu Dhabi has urged the public to be vigilant against online scammers posing official authorities in order to con people out of cash.

The fresh warning was alerted to fraudsters using the Abu Dhabi Police logo to threaten users to hand over money.

The police warned of several websites, the URL addresses of which change regularly, asking browsers to pay a fine for watching inappropriate material online.

In the latest scam, which has been in circulation for some time, online criminals mimicked official authority websites in a bid to steal Dh3,000 from victims via an immediate direct debit payment.

At the top of the page appeared the Abu Dhabi Government and Abu Dhabi Police logos.

“These links include the Abu Dhabi Police logo and the website is a fake,” a statement from the police read.

While the page had all the markings of an official government entity, the poor grammar used throughout raised the suspicions of several people.

“You’re browser has been locked due to viewing and dissemination of materials forbidden by law of United Arab Emirates”, the website pop-up read.