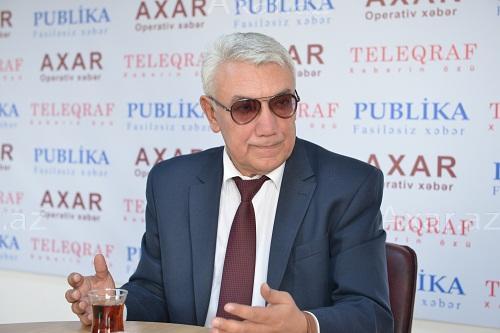 Azerbaijani society is not well aware of the history of the conflict between the Russia and Japan.

"First of all, I would like to state that the Azerbaijani society is not well aware of the history of the conflict between the Russia and Japan. Because the Azerbaijani media are not deeply interested in this conflict, and the Russian media are propagandizing the very wrong truth about this conflict. Therefore, I believe that in order to understand the essence of this problem, we must return to the history of this conflict. Firstly I would like to emphasize one event about this conflict. In 1956, the Moscow Declaration was signed between the USSR and Japan, and in that declaration the USSR agreed to return two of the four islands to Japan. I want to as question to you, if the Japanese side did not have any arguments in their demands, why would the USSR allow them to return the land? At that time it was impossible to get land from the USSR"

Eldar Namazov said that, the four islands we mentioned about were officially part of Japan before the World War II.

"Before the fascist Germany attacked the USSR, a treaty was signed between Japan and Soviet Russia and it was stated in the agreement that these two countries will not commit attack to each other. One year after this event, the Germans launched an attack on the USSR, which was considered the beginning of the Second World War. During this period, the Japanese had a friendship treat with the USSR and alliance treat with the Germans. So, the Japanese remained among the choices. At the time that German’s army killed plenty of Russian soldiers around the Moscow, the Japanese Empire made a choice between two treaties and announced that they will be remained loyal to the Treaty of Friendship with Russia and will not attack the USSR. In this case, the Russians brought about 1 million pedestrian, tank and ball divisions from Japanese border to Moscow, and liberated Moscow from the siege, which had a dramatic impact on the course of the war in the coming years.

After Soviet Russia won the war with the Germans, the US appealed to them to support American forces in the war with the Japanese. In this case, USSR had to make a decision between Japan and allied countries, as Japan did years ago. Unlike the Japanese Empire, the USSR abandoned the agreement between the two countries and declared war on Japan to help the allied states. The first argument of the Japanese in the island conflict is that we were faithful to the agreement between us and did not attack you with the Germans, you broke the treatment and declared a war against us with the United States.

How 4 island occupied by USSR? The thing is that in August 1945, USA threw atomic bombs on the Japanese islands of Hiroshima and Nagasaki, because they did not want to use pedestrian and sea forces in the war with the Japan. This event definitely shocked the Japanese, and they realized that if they have such kind of weapons in the United States, it would be impossible to resist them. And after this atomic attack, the Japanese Emperor, spoke on the radio, announced to the whole world that Japan had capitulated and stopped fighting. A few days after this speech, the USSR invaded the 4 Japanese islands, which are the reason of conflict now.

Following these events, a treaty was signed between the fifty countries in the United States San Francisco in 1951 on the outcome of the Second World War. During the agreement the USSR requires add the item indicating that the four occupied islands are the Soviet Russia’s territories but not only Japan but also Great Britain and the USA didn’t agree with this requirement despite the fact that they were USSR’s allies during the war. In this case, the USSR does not sign the contract about the Second World War’s sum.

After these events, the Japanese government made a very harsh standstill on the basis of the historical facts and arguments we have mentioned above when negotiating with the Russians. The arguments of the Japanese were so strong that when the Moscow declaration was signed in 1956, the communist state USSR forced to return at least two of these four islands to the capitalist state Japan.

For historical reasons mentioned above, the USSR or the Russian Federation and the Japanese Empire continue to face various conflicts and cold wars in the name of island conflict. This conflict has always been between the two countries and will continue until a new agreement is signed" - Namazov added.