Matthew Bryza: That is a war crime 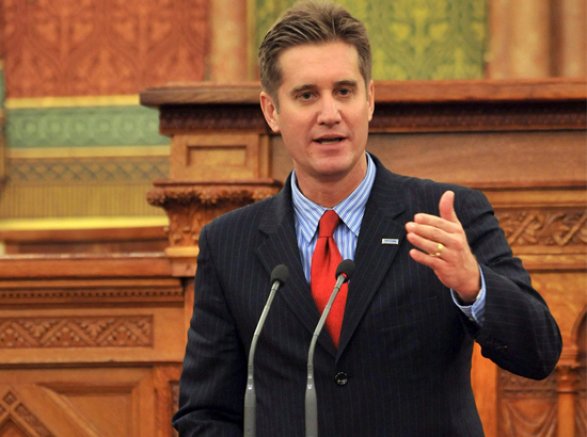 Axar.az presents the interview with Matthew Bryza, former co-chair of the OSCE Minsk Group, former US ambassador to Azerbaijan.

– How would you express your opinion on the facts about the launch of Iskander-M missiles in Shusha?

– The Iskander missile is a highly capable one. Unlike the Scud and Tochka missiles that Armenia used to target civilians in Ganja and Barda during the war, this missile can deliver heavier, therefore more deadly, payloads and is considerably more accurate, and can fly a much longer distance. Military experts and analysts tend to look at a decision to use Iskander missiles as escalating to a new phase of combat, one in which the one using that missile is telling the other side we are going to fight all out in that war, but in this case, it looks like maybe only two Iskanders were fired and they were fired toward population centers and so they were not going to change the course of the war they were only going to terrorize Azerbaijani civilians, unfortunately. Keep in mind that Russia used Iskander missiles in its invasion of Georgia in August of 2008 and so it’s not unheard of that these missiles are used in combat. It’s been known for weeks that Armenia did launch at least two Iskanders because I have seen the video footage of it, of Armenian soldiers launching the Iskanders, so that in itself is not a surprise. What is surprising is that number one, there has been reporting by military experts that Russia and Armenia maintain joint control of the Iskanders in Armenia so if Armenia launched an Iskander, that would suggest that perhaps Russia gave permission and why would that have been? These two were launched towards the end of the war; it may be that Russian meant to signal Azerbaijan not to push its military offensive any further beyond Shusha. I don’t know, but what has been said by an Armenian senior-general Hakobyan, he has affirmed that two Iskanders were launched. He has suggested that they were launched to a location - he did not say where - but where the sky was cloudy and on these days towards the end of the war, the sky was cloudy over Baku. So there is another official, an Armenian official, unnamed, who has suggested that one Iskander was flying towards Baku and was shot down by an Israeli-made Barak air defense system. I do not know if that is true, again the name of that official has not been disclosed, this may be a false report. The last point I will make is that: It is not so easy to deliver an Iskander successfully to the target unless the crew is highly trained. Moreover, it is very easy to make a targeting mistake, so I know military analysts who are investigating whether or not it could have been that these missiles have not targeted Shusha but there was a mistake on the Armenian side when feeding in the data to target the missile and it hit Shusha. Moreover, of course, I would like to add that if indeed the Iskander missiles targeted Baku or any other population center, well that is a war crime.

– How can we clarify why international organizations like NATO, OSCE have not yet commented on this issue?

– It is really wouldn`t be appropriate for later to comment on these Armenian's Iskander missiles because neither Azerbaijan nor Armenia are NATO members, and this conflict is not a part of NATO`s portfolio. Who would comment, perhaps would be OSCE and the Minsk Group, I think they should comment on targeting civilian populations, but perhaps OSCE has not responded either, because it is really old news, and it has been a long time since Armenia did launch at least two Iskander missiles. Now, if they had hit population centers, and killed a bunch of civilians, God Forbid, then I think you would hear some commentary not only from the OSCE, maybe from some NATO capitals. It could be also OSCE has not commented yet because there is so much unknown about whether or not Russians were involved in terms of giving permission to Armenia for the launch, and some clear what the target was, and if there are any casualties from the attack. Therefore, there is not so much to comment on in other words at this point.

– If it is revealed that the Iskander-M missile was launch at Shusha from the Russian base in Armenia, not from Armenia, could this lead to further sanctions against Russia?

– At this point I don`t think it is likely at all that the Iskander missiles were launched from Russian base 102 in Gyumri. That would result in additional sanctions from the US and the EU. That is because again, the missiles didn`t cause any damage. Yes, it could very well be Russia encouraged Armenia to launch them, but make sure that they didn`t impact any people, but did that as a signal to Azerbaijan that it should stop its military offense. But now I am speculating here, I don`t know, I probably shouldn`t answer this hypothetical question, except I am going to say that it is clear from the video footage I saw the Iskanders were fired not from Gyumri but looked from a lot to me like a territory near Nagorno-Karabakh. Just giving the terrain.