Final results of referendum will be announced next month 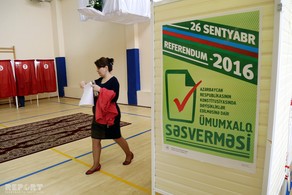 Final results of September 26 referendum in Azerbaijan, to make amendments to the Constitution of the Republic, will be announced until October 21.

During this period, the Central Election Commission (CEC) will summarize the referendum and announce the results in the form of a formal notification.

According to the Calendar Plan of main actions and measures for preparation and conduction of the popular voting (referendum) on September 26, 2016 to make amendments to the Constitution of the Republic of Azerbaijan, this procedure is to complete not later than 25 days after the voting day.