Azerbaijan owes no one, depends on no one 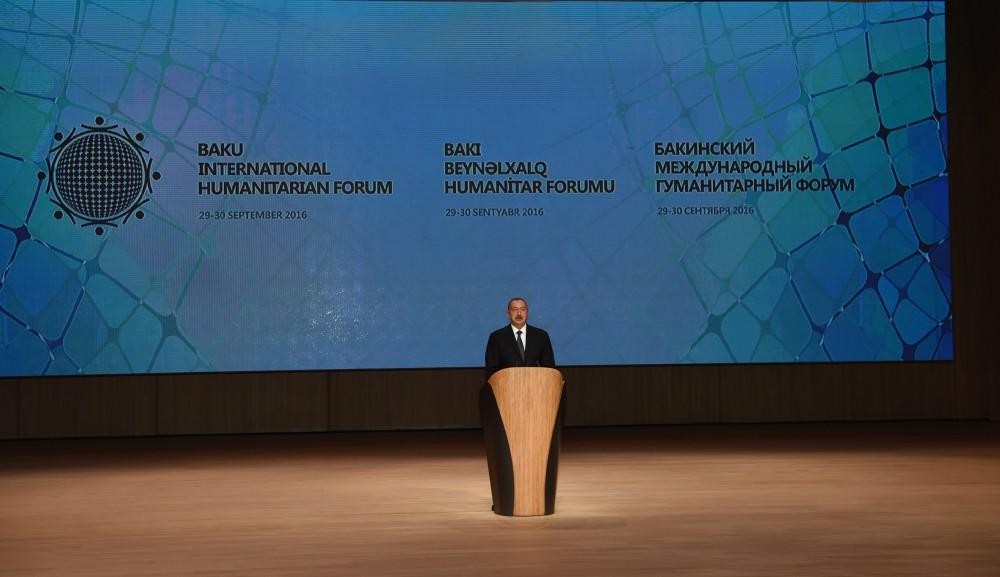 “The next month we will mark the 25th anniversary of restoration of our independence,” said President Aliyev, adding that most of the years during this 25-year period have been the years of progress and development.

“Today, Azerbaijan enjoys great reputation around the world. A few years ago, 155 countries, displaying great trust in us, chose us as a non-permanent member of the UN Security Council,” he added.

Ilham Aliyev went on to say that humanitarian issues get solved in Azerbaijan.

“We attach great attention to these issues. More than 3,000 schools, more than 600 hospitals and medical centers have been built and repaired in Azerbaijan in the last 13 years,” he said.

“The problems of the IDPs get solved, more than 90 settlements have been built, more than 250,000 IDPs have been given new houses, apartments,” added President Aliyev.

Further during his speech, the president said Azerbaijan’s economy is developing.

“In the past 13 years, the GDP has grown by three times. We have large currency reserves and they are equal to our GDP,” he said.

Ilham Aliyev added that serious steps have been taken to decrease unemployment and poverty in the country.

“Today, the level of both unemployment and poverty in the country stands at 5 percent,” he said. “Literacy level stands at about 100 percent.”

President Aliyev reminded that a great part of Azerbaijan’s economy is bound to natural resources.

“Despite a sharp decline in oil prices, Azerbaijan lived through the crisis with very few losses and today the dynamic development continues,” he added.

“Yesterday I was informed that the Davos World Economic Forum has put Azerbaijan in the 37th place in terms of competitiveness,” he said. “I believe that for a young state ranking 37th worldwide for competitiveness is a great achievement given that the first years of our independence were very hard, that there was a deep political and economic crisis.”

He went on to add that Azerbaijan holds the leading places in the world in terms of per capita number of refugees and IDPs.

“These are very painful statistics, but this is true. This of course has drawn our financial resources. Despite all this, the correct economic policy, the peace, tranquility and stability in the society, good relations with our neighbors and our international initiatives today present Azerbaijan in the world as a place of stability and development,” said the president.

“We have built a beautiful country and it will be even more beautiful,” added President Aliyev.