Azerbaijan's DM met with representatives of US SD 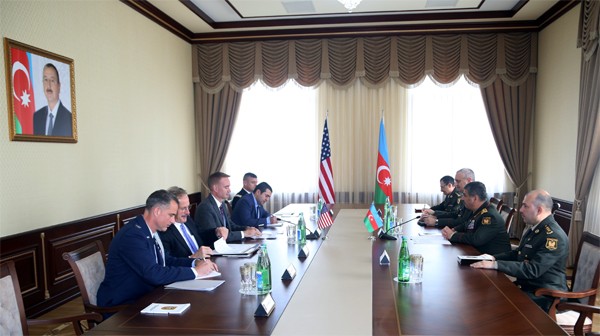 After informing the guest about the military-political situation in the region, Defense Minister emphasized that Armenia is a real danger to stability in the South Caucasus region. Minister also noted that Armenia is not respecting the norms and principles of international law, continues to occupy the Azerbaijani territory and, despite the intermediary efforts, Armenia by carrying out acts of sabotage on line of confrontation of troops, aggravates the situation.

At the same time, Minister spoke about the program of military cooperation between Azerbaijan and the United States, including the operational interoperability achieved within the NATO between the Azerbaijan's Armed Forces and the member states and partners of Alliance, as well as the contribution of Azerbaijan in non-combat mission, carried out in Afghanistan.

M.Carpenter in turn, expressed confidence that the US government is interested in expanding and strengthening cooperation with Azerbaijan in the sphere of security and defense, and will continue to work in this direction in the future. Highly assessing the combat readiness of the Azerbaijani Army, the guest emphasized that the military personnel is equipped with modern and new weapons, and be able to react quickly to any threat.

Prospects of expansion of bilateral military relations between the two countries, including cooperation in the sphere of security and defense, as well as issues of military education and medical preparedness were discussed in the meeting of mutual interest.