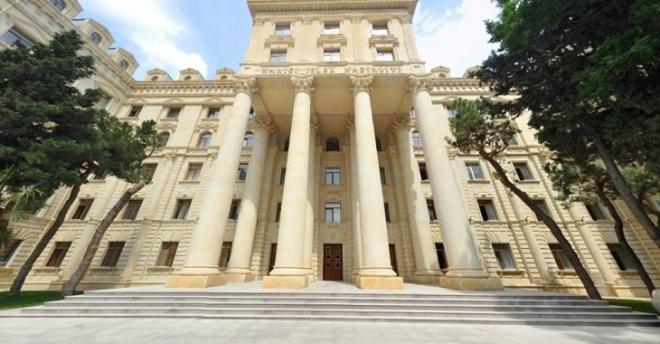 Foreign Ministry of Azerbaijan Republic has strongly condemned another provocation committed by a reconnaissance group of the Armenian Armed Forces on the Azerbaijani-Armenia state border.

Instead of taking concrete steps for the resolution of the conflict and engaging in substantive talks according to the discussions held during the Vienna and St. Petersburg meetings of Armenian and Azerbaijani presidents, Armenia tries by means of different provocative actions to undermine the negotiations, to continue its policy of aggression against Azerbaijan, as well as to strengthen its military presence in the occupied territories of Azerbaijan and by attempting to involve the third parties to the conflict to maintain the status-quo.

“Azerbaijan has repeatedly stated that the continuation of Armenian aggression against Azerbaijan and the presence of Armenian armed forces in the occupied sovereign territories of Azerbaijan remains a major threat to regional peace and security, and is the main cause of violation of ceasefire and occurrence of incidents. The escalation of situation in April with the instigation and provocation of Armenia is yet another vivid example of that,” the ministry said.

Azerbaijan with the aim of eliminating the consequences of Armenian aggression and occupation of its territories, ensuring its territorial integrity and sovereignty will continue its efforts and the substantial negotiations jointly with the OSCE Minsk Group co-chairs for the settlement of the conflict on the basis of the norms and principles of international law and the relevant resolutions of the UN Security Council and the Helsinki Final Act, the ministry added.

A reconnaissance group of the Armenian Armed Forces tried to violate the Azerbaijan-Armenia state border on Dec. 29 morning. The Armenian group found itself in the ambush of the Azerbaijani army while violating the borders. The enemy suffered losses in the ensuing clash and had to retreat.

A soldier of the Azerbaijani Armed Forces, Gurbanov Chingiz, is missing as a result of the shootout. He is being searched for.

Armenia’s Defense Ministry earlier reported that three Armenian servicemen died in a confrontation on the contact line of troops on Dec. 29