Close partners in fight against radicalization 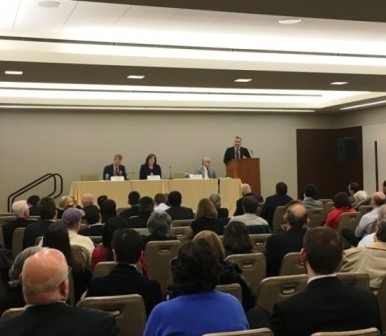 Azerbaijan and the United States have a close partnership in the field of energy and the fight against radicalization, said Elin Suleymanov, Azerbaijani ambassador to the US.

He made the remarks during the seminar on “New partners: Israel and the Caucasus region” dedicated to Azerbaijan-Israel partnership, which took place on the sidelines of the Policy Conference 2016 of the American Israel Public Affairs Committee (AIPAC), the most influential diaspora organization in the US.


Noting the importance of US support for energy projects in the region, the Azerbaijani ambassador said that against the background of the ongoing geopolitical processes, there is a need for the US strategic approach based on long-term interests on the South Caucasus.


The diplomat noted that the first republic in the Muslim East was established in Azerbaijan, which is one of the first countries to enfranchise women even earlier than the US.


Suleymanov said that the development of Azerbaijan as a progressive Muslim state is ensured thanks to the far-sighted policy of the country’s leadership.


The ambassador stressed that at a time when radicalization prevails in many parts of the world, Azerbaijan is known for its tradition of tolerance, and regardless of religion and ethnicity, all citizens, including Jews live in peace in Azerbaijan.


In addition, the seminar participants exchanged views on the occupation of Azerbaijani territories by Armenians, on the geopolitical processes in the South Caucasus and challenges to security in the region.