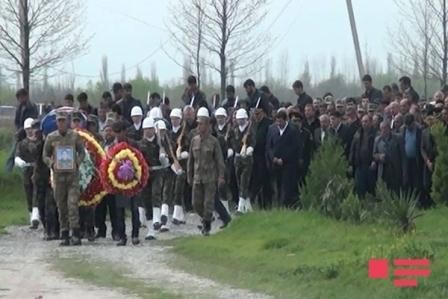 Azerbaijani Junior sergeant Abbaszadeh Elshad Raguf oglu, martyred dealing with an assault carried out by an Armenian reconnaissance-sabotage group at the contact line yesterday, was laid to rest Saturday in Terter’s Kangarli village, his birth place.

The funeral was attended by high-ranking officials from the Defense Ministry as well as representatives of the district executive authority.


At the end of the funeral, Azerbaijan’s national anthem was played by a military orchestra.


Note that, under the defense minister’s order, junior sergeant Elshad Abbaszadeh, after his death, was awarded the third-degree medal for distinguished military service.