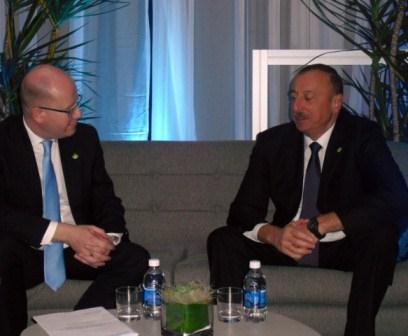 President of the Republic of Azerbaijan Ilham Aliyev has met with Prime Minister of the Czech Republic Bohuslav Sobotka in Washington.

President Ilham Aliyev hailed the current level of Azerbaijani-Czech relations. The head of state said cooperation between the two countries contributed to further development of ties. President Ilham Aliyev also noted that there were good friendly relations between Azerbaijan and the Czech Republic, and hailed the high level of political ties. The head of state stressed the importance of developing political and economic ties.

President Ilham Aliyev also said work was carried out on a document on strategic cooperation with the European Union.

Bohuslav Sobotka emphasized the importance of such meetings and visits. The prime minister also said the Czech Republic considered Azerbaijan as a main partner in the Southern Caucasus region. Bohuslav Sobotka said his country attached great importance to the bilateral cooperation in the fields of energy and energy diversification. The prime minister said they were interested in expanding cooperation with Azerbaijan in this area. Bohuslav Sobotka also added that his country attached significance to cooperation with Azerbaijan in the military-technical and defense industry fields, as well as in the implementation of the Southern Gas Corridor project.

On the importance of Azerbaijan-European Union cooperation, the prime minister highlighted the opportunities of how the Czech Republic could contribute to this cooperation.